CURATORIAL RESIDENCY
​Le Fonderie Darling, Quartier Éphémère, centre d'arts visuels—partnerships with the Centre Culturel Canadien in Paris, the City of Paris, Le Couvent des Récollets in Paris, and La Panacée in Montpellier, FR
1–30 October 2018
In my application to participate as the Curator in Residency for the Curatorial Residency in Paris—Programme Ville de Paris aux Récollets—Fonderie Darling, Centre Culturel Canadien, I proposed a project heavily invested in emotional affect to prioritize thinking, feeling and (un)doing curatorial research. This proposed endeavour rang true throughout my time in Paris.
​It would be insincere to reflect and report on my residency if I didn’t bring up the fact that I was depressed, anxious and lonely for the majority of my time in the city. This was all a part of my experience. Amidst having the space and time to write and reflect on my independent curatorial practices, visiting exhibitions and art fairs that opened my eyes up to the international contemporary arts scene, and investing myself in Paris’ archives, I was admittedly depressed. I was a sad grrrl in Paris. What other way is there to really say it? Lonely, depressed and riddled with anxiety.
​The first time in my life that I can remember having the kind of anxiety attack that makes you feel like your heart is about to fall out of your butt, I was laying on my mother’s bed staring up at the ceiling fan while she folded laundry around me.  I tried putting into words the feelings I was feeling: the room was moving in fast-motion and I couldn’t keep up; my chest was being squeezed tighter than a constrictive sports bra; I was hearing my words delayed after I had already said them; and I was sweating so much my glasses kept falling off my face. I was eleven, maybe, twelve?
I arrived in France on a Tuesday morning. It was my first time in the country, not having much travel experience prior, nor the financial capacity to ever imagine visiting, no less, living in a place like Paris, and I was overwhelmed. But it started off with the butterflies in your stomach OH WOW I CAN’T BELIEVE I’M ACTUALLY HERE, kinda overwhelmed feeling. And soon escalated into the level of I DON’T EVER WANT TO LEAVE THE SAFE EMBRACE OF THESE FOUR APARTMENT WALLS AND BRAVE THE OUTSIDE WORLD. My old friend anxiety was unexpected—it nauseatingly surprised me. Almost like seeing an ex while rounding a corner en route to get your bicycle fixed. I didn’t appreciate it just showing up in my world at that particular moment.
In a city and country unfamiliar to me, it became shockingly clear that my resiliency tactics I often use to dig myself out of anxious despair were no longer within my immediate reach: I was without community. My intimate friendships were outside of my reach—only accessible via phone/skype calls, emails and social media. The bonds I build my life up and around were disjointed in this distance I was experiencing. Moving through the city with only my hopeful itinerary and Google Maps at my side, I felt very alone and exposed at the same time. 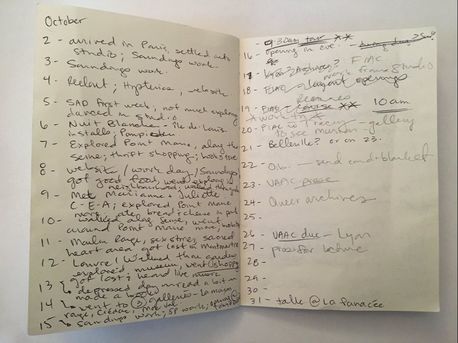 I turned to Ann Cvetkovich and her text, Depression: a public feeling. Recalling and thinking about how her words and her prescription that “feeling bad might, in fact, be the ground for transformation...”[1] and how embracing rather than glossing over bad feelings can crystalize into queer hopefulness. In that moment, I decided to take “the negative as part of daily practice, cultural production, and political activism.”[2] I decided to take seriously and deeply and critically the question, “How do I feel?” I decided to think of affect, emotion, and feeling as true to life methodological approaches, as points of departure for curatorial exploration.
[1] Ann Cvetkovich, “Introduction. Public Feelings: A Collective Project,” Depression: a public feeling (Durham, NC: Duke University Press, 2012): 3.
[2] Ibid.
​Eve Sedgwick encourages this model of working: to embrace queer aesthetic practices and to write, think and produce creatively from an eclectic range of materials, including accounts of her own feelings, most especially in her critical work, A Dialogue on Love.[1] There is a shyness and true vulnerability of revealing herself in this text, exploring her accounts of therapy for depression after breast cancer treatment, and thereby revealing an unconventional writing account that opens up possibilities for inter-relationality. Combining dialogue, verse, and her therapist’s notes all interwoven together into one comprehensive text provides a snapshot into the potentials of privileging the interior life within critical writing discourse. José Esteban Muñoz also advocates for this method of inserting the personal into queer modes of analyses in Cruising Utopia: his writing brings in his own personal experience, “…as another way to ground historical queer sites with lived queer experience.”[2] As he notes: “My intention in this aspect of the writing is not simply to wax anecdotally but, instead, to reach for other modes of associative argumentation and evidencing.”[3] My initial proposal for my curatorial research and while being in residence was to queer Paris’ archives from within a feminist framework. My depression and anxiety while being in the city propelled an emotionally charged awakening. I shifted course to focus in on my own feelings, and to produce my own personal archive while being in Paris—to present an embodied experience of being. This report, sprinkled with ephemera and memories and personal anecdotes plays within this model of working from the core of the personal.
[1] Eve Kosofsky Sedgwick, A Dialogue on Love (Boston: Beacon Press), 1999.
[2] José Esteban Muñoz, Cruising Utopia: The Then and There of Queer Futurity (New York: New York University Press), 3.
[3] Ibid, 3-4.

​I started making audio recordings: listening to poetry readings on the front lawn of Le Couvent des Récollets; riding the metro and reading my book, while an older man played accordion and asked for spare change; walking through the city and joining a march for trans rights; sitting in a park, prepping notes before a meeting, while two young girls sang nursery rhymes and danced on top of a ping pong table; moving in between exhibition openings that had line-ups out the door; drinking coffee and answering emails at the Centre LGBT; stumbling into a live jazz performance on my walk home after a long day. Everywhere I went, every art show I attended, I picked up and saved the programs, the broadsheets, the booklets, the short essays, the catalogues, the postcards and rack cards: any and all printed material. These recordings and paper copy reminders exist for me as acts of tracing my steps; nuanced mappings of my encounters throughout the residency. 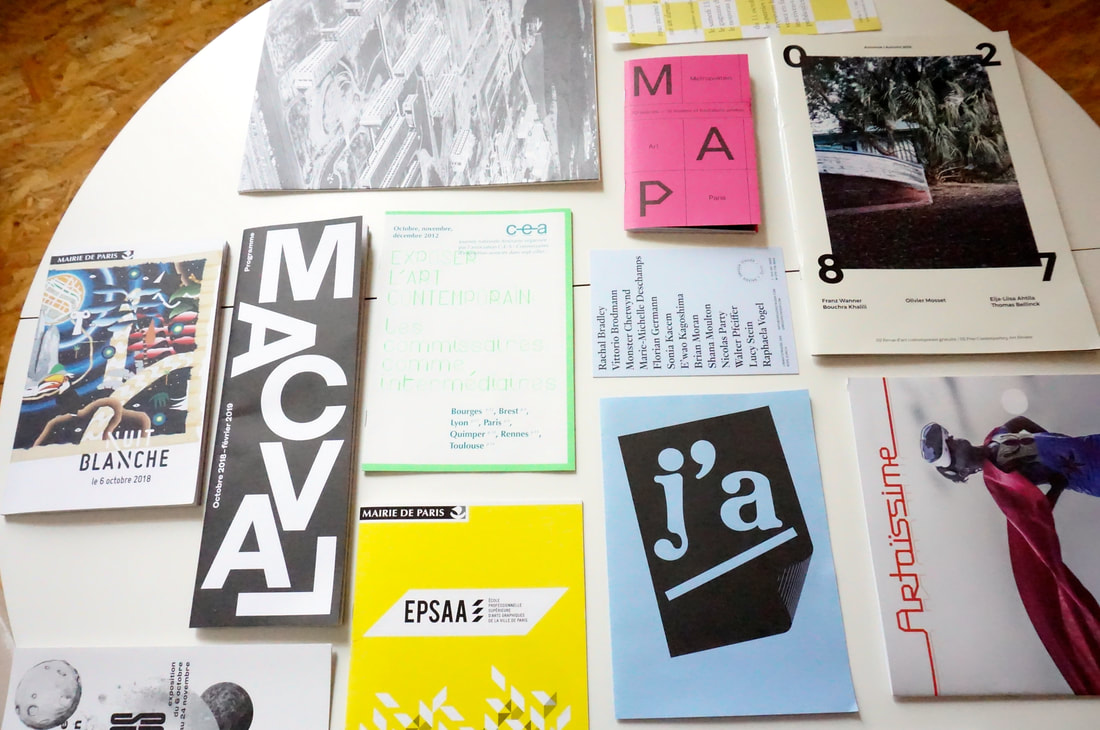 ​I will be forever grateful for the opportunities, memories and connections that the Curatorial Residency in Paris–Programme Ville de Paris aux Récollets–Fonderie Darling, Centre Culturel Canadien afforded me with—I will forever carry the experience with me. It was the daily reminder of the fact that I was surrounded by exhibitions and cultural happenings on such a critically innovative stage of contemporary art that provided solace amidst my anxious emotional state of being. It was the habitual act of going to galleries and meeting artists, curators and cultural producers that offered glimmerings of international community. It was the everyday moments of being in a space unfamiliar to me that pushed my practice out of its comfort zones and allowed me to expand my curatorial methodologies in directions that I have not yet taken.